Led the design and launch of Cardano Labo's first mobile and desktop application; a multi-cryptocurrency wallet for beginners and first-time users.

After 6-months of researching and learning about cryptocurrency, Cardano Labo's first consumer-facing product development projects, was this Alta Wallet. The creative team consisted of myself, 1 Jr. UI designer, and 1 Int. Visual designer, and we were given 4 weeks to deliver the v1.0 designs for both the mobile and desktop application, while also working on another product Alta Bridge (anonymous trading platform) and designing the company website.

Seven years after the bitcoin network started, and two years after the collapse of Mt. Gox, most cryptocurrency wallets still required some technical know-how and were difficult to get started. Slowly, some user friendly wallets were starting to appear, but only supported a single currency or were restrircted to a website.

From the start, management wanted to focus the product for beginner users and create a system where our product could be used on multiple platforms.

During this project, though I was working remotely from Canada, to gain insight, I conducted user interviews with beginners and intermediate-level users by attending various cryptocurrency meetup events in Vancouver (Dctrl, Vancouver Blockchain & Crypto Network and Bitcoin-N-Beers Vancouver). 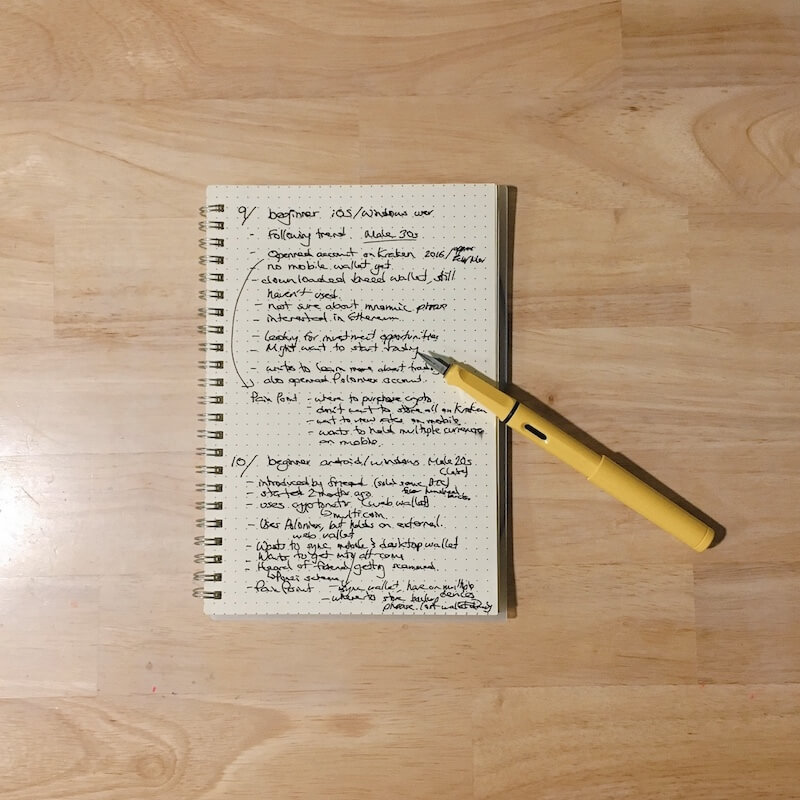 "I'd like to see what wallet offers in features and security before I need to back-up (setup) the wallet."

With limited time, a competitive analysis was conducted, which led me with assisting the business and development team with the creation of a prioritization matrix (impact/effort matrix). At the same time, I educated and led the jr members to create screenshot user flows of competitor products.

Based on research insight, and our time restraint, we opted to design the the most basic multicurrency wallet, or MVP (minimum viable product) to meet the release schedule of the Beta product. Time was allotted for further user testing and interation after the beta release, hence the following user flow was designed to meet the MVP requirements and applied to both the mobile and desktop application. 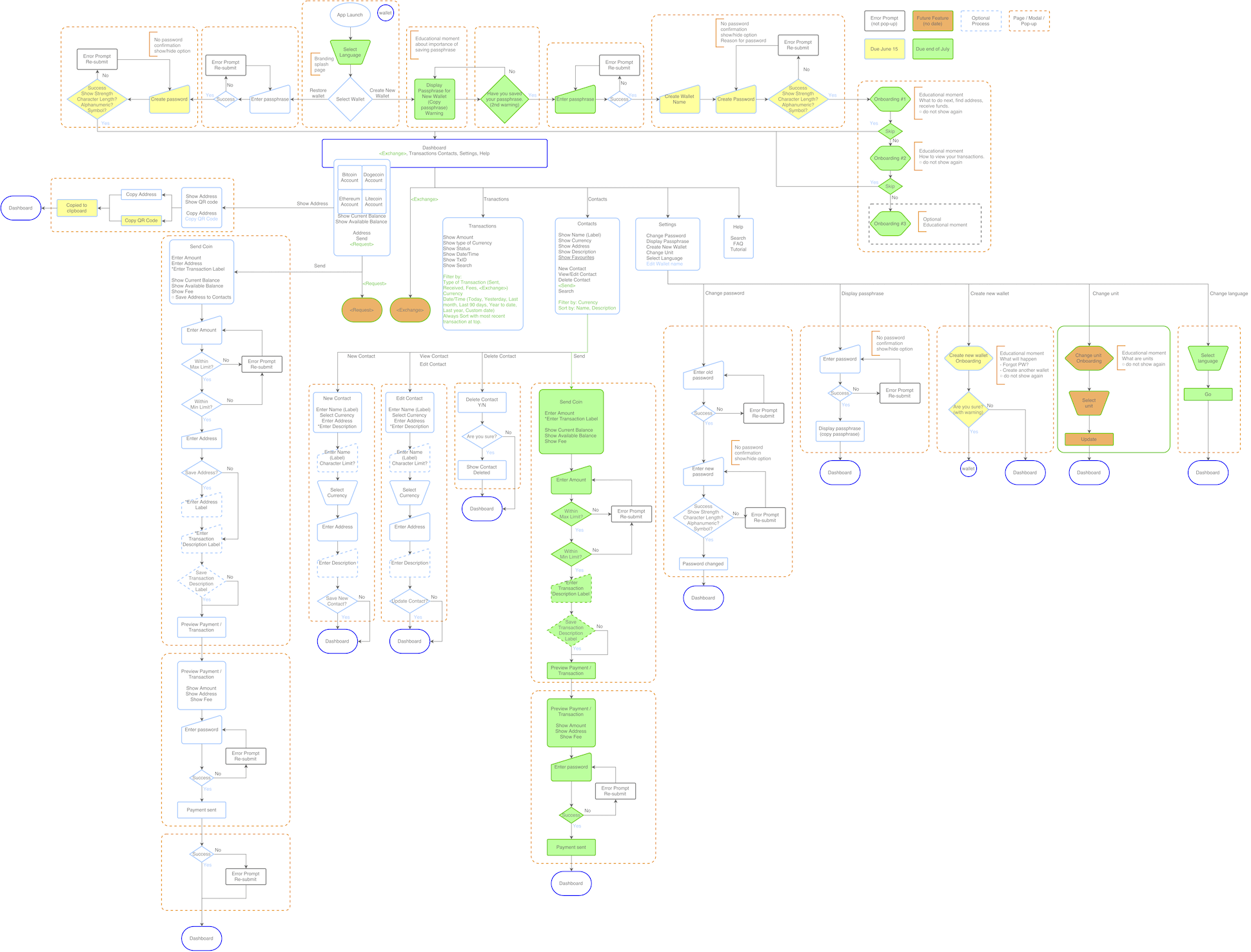 After the successful public release of the Beta version, time was finally allotted for user testing. According to our stakeholders, our target audience were beginner users and people who are interested in blockchain technology and want to start holding their digital assets outside of online exchanges for security reasons. As news of the hacking of Mt. Gox in early-2014 was still fresh in many people's mind.

Five beginner blockchain users were used to test our v1.0 product, and as per my original findings during my research, the greatest pain point with our product user flow was the onboarding experience. Like all other crypto wallets on the market at the time, before getting to the main wallet dashboard, all users had to complete the backup process.

*Note: Crypto wallet application developers normally do not have access to users funds. In case of an unfortunate scenario where the user forgets the password to access their funds, loses their device with their wallet application or the wallet service provider is no long in operation. Users can restore their wallet by exporting their wallet's private key (BIP39 seed phrase is currently the most common), by writing down their wallet's 12-word backup passphrase on a paper and storing it. Crypto wallets confirm that the user has exported/backedup their 12-word passphrase by asking them to re-enter or confirm the passphrase presented in a previous screen. Once confirmed, users can proceed to the main dashboard (wallet).

As, it is the users responsibility to backup their wallet, in case of unfortunate events, many beginner users complained that they were unable to play around, and discover the wallet, before having to proceed with the wallet backup.

After a number of small iterations, and 2 user testing phases with beginner users, we developed the following new flow, which was received positively during our user testing phase. User were now able to navigate the wallet without initially having to perform a wallet backup. Only after the user received their first funds, would they receive a warning on the dashboard that their wallet has not yet been backed-up and another warning, when the app is opened.

"Compared to other wallets, I like how I can play with the wallet first, before importing or generating a new wallet. And not be forced to backup until I actually have funds in the wallet." 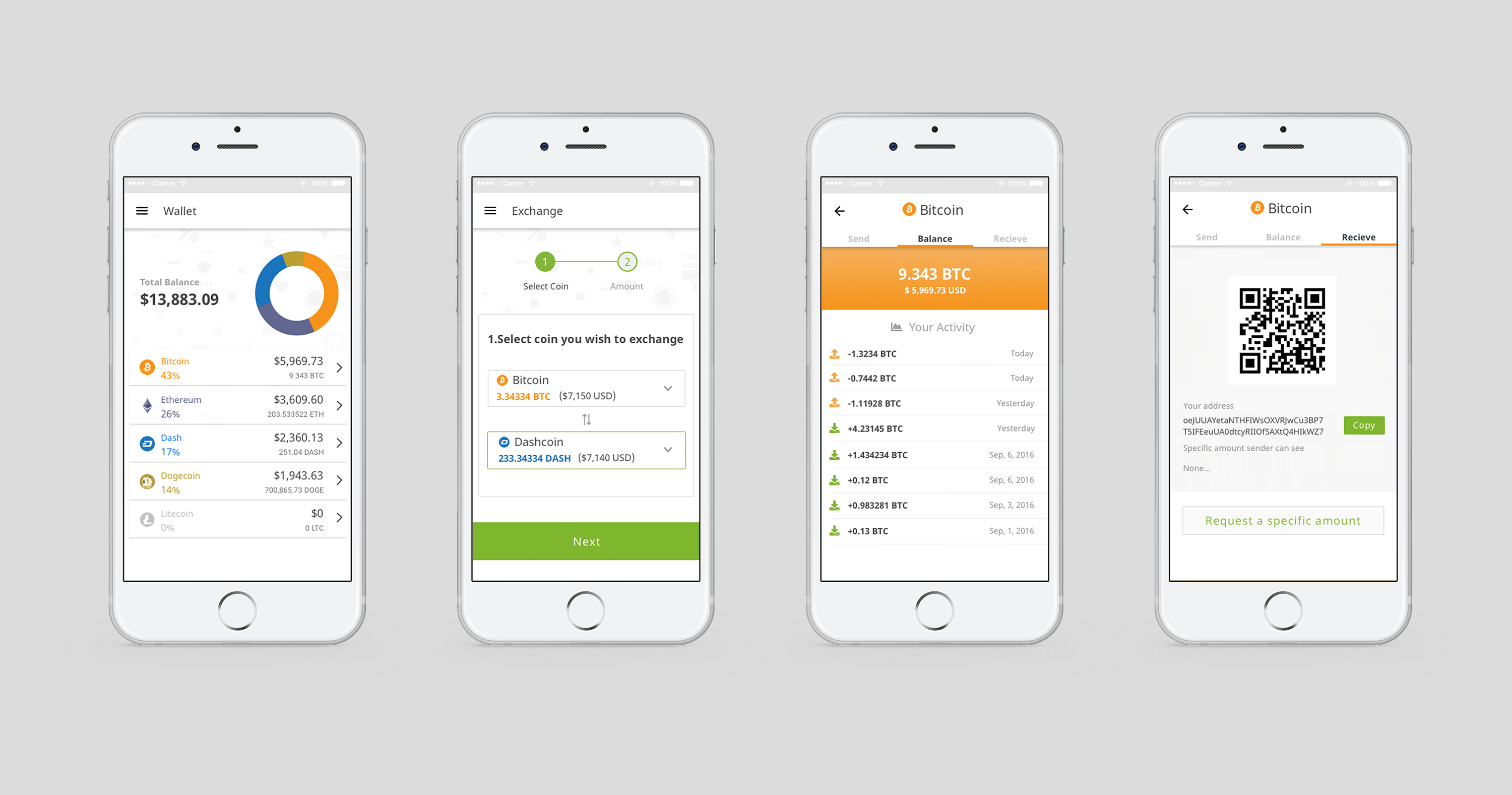 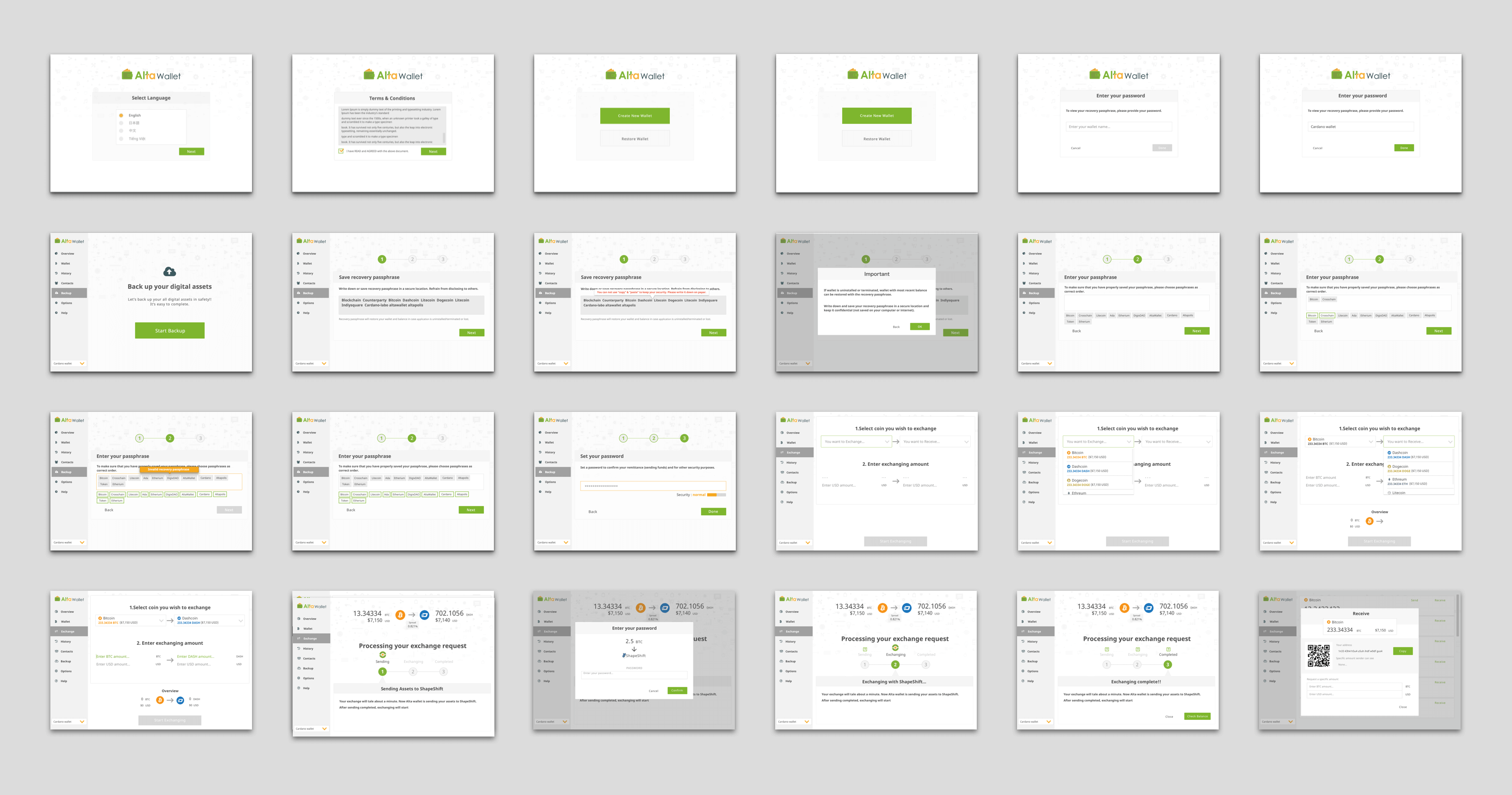 User interface was designed by the UI designer

The biggest lesson we learned after releasing v1.1 with the new backup flow was that user testing with testnet funds and smaller values of cryptocurrency does not reflect real world scenarios.

Though many commented that the ability to roam and utilize the wallet without backing-up was beneficial, there were a select number of very beginner users where this new flow caused problems. These users were older adults, 65-years-old and older members, for some whom were utilizing a smart phone for the first time. These were career investors, but now caught up in the new trend that is cryptocurrency, with very little technical knowledge. Once users received funds in their wallet, the warning to backup would appear, but some of these senior members failed to read the full warning and believed that something was wrong with the application and begain uninstalling and reinstalling the application, to remove the warning message.

As a result, there were some older adults who lost access to their funds, as they failed to backup their wallet, as they failed to properly read and understand the importance of backing-up their wallet (which is one of the key fundamental parts to understand blockchain. The harsh reality of the decentralized blockchain technology, where the user is fully responsible for their actions, whereas if a similar error was made with a centralized banking system, banks may possibly provide support with recovering their funds.

In a later version, the Receiving address was hidden until the user backed-up their wallet. So, the user can continue to discover the wallet, but are unable to receive funds until their wallet was backed-up.

Since public release, every month Alta Wallet released updates with new features and functionality. Approximatley a year after public release, the product owner left the organization, Cardano Labo was rebranded to a new company and a new digital wallet "Infinito Wallet" was developed from the ground up, as new libraries (faster, lighter, functional) supporting blockchain became available.

*As I was only directly involved during the alpha, beta and pre-v1 release of Infinito Wallet, a case study for this project is not available.